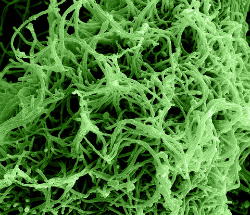 It seems like every single time we turn on the TV or even engage in a casual conversation, the word 'virus' pops up.

There continuously seems to be a deadly virus ripe to annihilate humanity evident on the horizon every month.

Thankfully, either these reports are bloated, innaccurate journalism or science is fantastic enough to prevent our extinction.

Although we are all familiar with the general concept that viruses may be deadly, not many of us really know what they are.

Viruses lack the capacity to flourish or replicate outside of a host body. These microscopic parasites are considered public enemy number one to all life on earth, even causing death to basic life forms such as bacteria. All of this comes in a remarkably small package. Bacteria are much smaller than human cells and a typical virus is approximately a thousand times smaller than bacteria.

The scientific community is still arguing whether viruses are actually considered to be 'alive' themselves. Viruses do contain elements that denote life such as either DNA or RNA (one or the other, never both); however, they can not independently perform functions based upon the information contained in their genetic make up.

Viruses are incredibly basic entities composed of single or double stranded DNA/RNA that is the entirety of their genetic information, a coat of protein for protection and sometimes an additional envelope of lipid membrane for further protection.

Viruses are traditionally transmitted through the respiratory system, open wounds or insects. Once inside the host the primary purpose of the virus, called a virion after entry, is to utilize the host's cellular machinery to express and replicate its genome.

Viruses attach themselves to specific, targeted cell surfaces when they enter a host. After attachment the viruses either inject their contents into a cell or dissolve in their entirety into the cell. From this point, they hijack the cellular machinery and utilize their enzymes to create an ultra efficient virus assembly line to create new virus replicas. Once these replicas are created, they go exploring for new potential cells to turn into virus factories.

Easily one of the most earth shattering and exciting medical discoveries has come out of studying the internal defense systems of bacteria when battling against viruses.

Learn more about this fascinating topic in our next post!