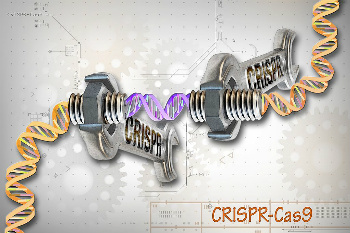 Effective modified DNA sequences? The ability to turn specific genes on and off at will? The potential to systematically re-write our genetic code?

Now you see why this is so incredibly exciting! How does it work, though?

What we have referenced as CRISPR up until this point is actually more accurately called CRISPR-Cas9. It is a dual-part system.

As a quick aside, and just in case you're not familiar, it's important to understand the difference between DNA and RNA. In brief; DNA is the very stable, double stranded, long term storage system for our genetic blueprint. While DNA stores this information on how we should be built, single stranded RNA does the actual building and carries out the task according to the blueprint.

If we were to simply utilize the Cas9 system to perform targeted cuts in our blueprints (DNA), the human body naturally would repair these cuts according to the original design (though it frequently makes mistakes). While this is fascinating in and of itself, and can assist us in learning what particular genes actually do, the more astonishing task of CRISPR is to provide this internal repair system with a new template from which to build.

This is not the first time humanity has discovered the ability to modify DNA; however, this is infinitely more precise and efficient. For instance, scientists can utilize RNA Interference (RNAi), but RNAi is comparable to using a chainsaw to make an ice sculpture while CRISPR-Cas9 would be a fine chisel. Yes, you can accomplish the job with a chainsaw, but you may cause some unintended cracks.

Now imagine the implications of this new tool. While there is still a lot of work to be done, visualize a world where we could go into the human genome and remove life threatening diseases or neurodegenerative disorders.

Imagine a world without Alzheimers, Parkinsons and even cancer.

Take this a step in another direction and imagine mosquitos that can no longer pass malaria to humans. If we wanted to get even more creative, we could theoretically turn tigers into sabertooth tigers or elephants into wooly mammoths.

This could be absolutely world changing, but is it ethical? What if our efforts go horribly wrong? What if they go perfectly according to plan and work, but they have completely unintended and unforseeen consequences?

What if these unforeseen changes happen while we're performing this on embryos and these mistakes become a permanent part of our DNA passed down to new generations?