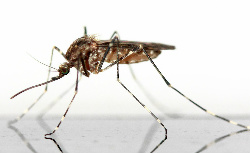 Remember when you put down that wager based on "when pigs can fly"? It's looking increasingly likely that people may be coming to collect in short order.

While that is clearly an absurd idea and it's tough to discern a reason why scientists would see fit to genetically manufacture flying pigs, this and many similar concepts may very well be feasible nevertheless.

Performing groundbreaking scientific work is at once fascinating and incredibly frightening. One of the most puzzling and alarming principles of being on the bleeding edge is that you are on a path that has not been traveled before; therefore, you can not be certain where it leads or even what other paths may branch off.

Even if you have the greatest intentions you could still be accidentally responsible for a horrible abomination -- If you have terrible intentions this could be infinitely worse. After all, nature cares very little for intentions.

Let's take the genetic modification of mosquitoes into consideration. Malaria is responsible for more than 1 million deaths per year and is transmitted by female mosquitoes. Why not modify female mosquitoes and make them incapable of carrying the disease? This seems like a no brainer. If we prevent mosquitoes from being able to spread the infection then 1 million more people get to live their full lives!

Before you get scissor happy and start modifying mosquito DNA with CRISPR, however, let's do a little thought experiment. It's important to understand that malaria is neither a virus nor a bacteria. It's actually a parasitic, single-celled organism.

With that in mind, let's modify mosquito DNA and have their immune systems destroy this organism on sight. We'll also make sure that we genetically modify mosquito embryos instead of full grown mosquitoes so that our modification gets passed down to future generations.

Beautiful! Now we live in a world without malaria!

Unfortunately, it looks like carrying malaria actually decreased mosquito life spans and prevented mosquitoes from passing on yellow fever. How were we to know?

Now we have a considerably larger problem on our hands. We just drastically increased the population of mosquitoes due to increased life and reproduction span, they have a higher occurrence of an enhanced version of yellow fever, and they're passing this lovely package on to all of their millions of children, forever.

If that seems unreasonable, I'm sure you can think of more reasonable ways this could go wrong. Have some fun with it.

Let's take human genetic modification into consideration now. How about we build better athletes. We do have this ability, in theory, right now.

We could theoretically modify a future generation to be taller and stronger. 'Natural born' football, hockey and basketball players.

Those of us that pay attention to pop culture in the world of sports would not be surprised by the next possibility. What if this first generation is slightly more domineering and violent? Not to worry.

What if these violent intentions progressively become worse from generation to generation as they're passed down? Five generations later we have a bunch of 6'8, 300lb psychopaths running around looking for a reason to kill, or maybe they don't even need one.

It does not all have to be doom and gloom, however. It is just very important that as a scientific community, and as a society, we take the potential flaws in our plans and outlying possibilities into consideration.

We should take into consideration any long term affects our changes may have along with unintended yet serious ecological changes.

Let's be careful and make sure we take the proper precautionary measures before we start changing the world forever.