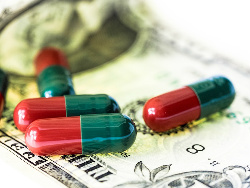 There is no doubt in the mind of any American that Big Pharma truly earns its name. Every time I listen to the radio or a podcast, read an article online, hop on social media or even walk down the street, I seem to be inundated with pharmaceutical marketing.

How truly BIG is Big Pharma, though? Let's go over some interesting facts and figures.

The reason why you may be seeing so many advertisements is that the pharmaceutical industry has a combined total marketing expenditure of approximately 6 billion dollars in 2016. That's billion, with a B.

The reason why you're seeing these advertisements online is because approximately 30% of that total marketing budget is spent on digital media (around 2 billion).

Those may appear to be somewhat daunting numbers, but that is only the tip of the iceberg.

The United States accounts for around 45% of the total global pharmaceutical consumption with an annual spending of 425 billion dollars. Written out: $425,000,000,000. That's relatively $2.50 for every star in the Milky Way Galaxy. (Fun Fact: You can only view slightly more than 9,000 stars in the night sky with your naked eye)

This is a much more curious concept when you realize that the US population makes up only 4.5% of the world population. More on astonishingly frightening correlations like that in a later post.

The worldwide market for pharmaceuticals was projected to grow approximately 30% between 2015 and 2020, and thus far they are on track. This would increase output from 1 trillion dollars to 1.3 trillion on a yearly basis, and this is generally projected to continue going up by around 4% every year.

Some of the biggest names in the game are easily recognizable -- Pfizer and Johnson & Johnson. They come in at an annual value of $52 billion and $72 billion, respectively.

The US based pharmaceutical industry is even responsible for $47 billion in exports per year. Pfizer themselves paid $976 million dollars in penalties and fines between 2012 and 2015, so at the very least we know the government is happy with the extra money.

You would not be surprised then to hear that healthcare expenditure is roughly 3.12 trillion dollars, accounting for 20% of the GDP, every fiscal year.

Those are a lot of very big numbers. Does that necessarily mean that Big Pharma is a villain, though?

Not necessarily. Read our next post to learn a little bit more about the bright side of Big Pharma.