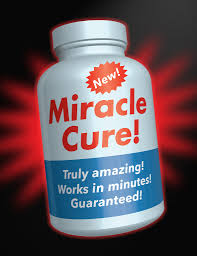 A portion of the historic Hippocratic Oath taken by all physicians states, "I will use treatment to help the sick according to my ability and judgment, but never with a view to injury and wrong-doing"

This sounds like a wonderfully utopian and altruistic principle; unfortunately, this is -- either through intentional neglect or painful ignorance -- often not observed.

The pharmaceutical industry falls into an interesting quandary when it comes to being an effective business. How do you go about being a successful company while not removing the need for your company in the first place?

If Big Pharma some day miraculously cures every disease, they would be out of business and everyone would remove their investments.

This leads to an unfortunate scenario where the impetus is either put on making and keeping people sick or on providing treatment in the place of outright cures.

An absolutely frightening medical fact is that prescription drugs are the third leading cause of death, following cancer and heart disease.

In the words of Doctor Gotzsche, co-founder of The Cochrane Collaboration, which serves as a world leader in the review of medical research data: "...if such a hugely lethal epidemic had been caused by a new bacterium or a virus, or even a hundredth of it, we would have done everything we could to get it under control."

Another commonly believed perk of such a mammoth pharmaceutical industry is that it serves as a great boon to both the US economy at large and the those within its employment. Big Pharma is frequently lauded as an industry that you can work in where you will be paid much higher than the national average.

This is becoming the case less and less as most of the largest pharmaceutical companies are looking to offshore manufacturing and other operations. This is due in part to allegedly high failure rates of new products despite the fact that successful drug approvals have reached a historic high point over the last few years.

This all really leads to the final question:

There just seems to be something wrong with this equation.