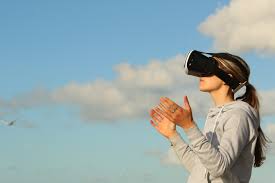 Virtual and augmented reality has arrived!

Ten years ago, people would have scoffed at this concept. Those of us that are old enough to recall 'remarkable new breakthroughs in virtual reality' such as Virtual Boy would be at the front of the crowd, laughing, when we hear those words again.

Looking back on arguably failed technologies like Virtual Boy and the Virtual Reality Glove, it's important to understand that despite the fact that these did not gain market attention, they were still a valid step in the right direction.

We have now entered an entirely new era of virtual reality and we are really just testing the potential future boundaries. Despite the fact that the virtual reality experience is still primarily marketed toward entertainment and gaming, we are coming to realize that there are other more practical applications. One of the industries that instantly jumped at the opportunity was the field of medicine and medical education.

The first ever surgery broadcast through virtual reality for a 360 degree, point of view audience was broadcast at the Royal London hospital in April 2016. This was a ground breaking broadcast that allowed the consumer, whether they were a medical student, a journalist, or just an avid VR fan to view first hand how a surgeon removed cancerous tissue from a patient.

Gone are the days where it was required that an auditorium be filled with lookers-on potentially contaminating the sterile environment of a surgery room just to learn. The wave of the future allows medical students to experience surgery first-hand from the perspective of the operating surgeon. This is a giant leap in medical education that allows students the ability to accurately visualize situations that they would otherwise not be able to witness.

Another company has designed a fully immersive augmented virtual reality version of the human body that allows consumers to effectively visualize normal bodily functions along with disease and treatment. This provides students with an unprecedented interactive learning experience.

Beyond education, virtual reality systems are being utilized in patient care. Certain technologies provide patients with clever distractions from their pain or the trevails and negative side effects of particular medications such as chemotherapy. One company takes this technology much further and allows patients to experience their home environment while at the hospital.

Perhaps the most fascinating use of VR thus far has been in the rehabilitation of patients with severe spinal cord injuries. After undergoing an extensive 12 month training program, eight paraplegic patients saw increased neurological control over their lower extremities that otherwise would have remained completely disconnected. Through the use of brain-machine interfaces and lower limb exoskeleton, all eight patients experienced significant improvement in their ability to exert voluntary motor control.

This particular project, much like most of VR, is still in its infancy stage; however, it is not difficult to imagine how absolutely ground breaking and world changing this technology could truly become.