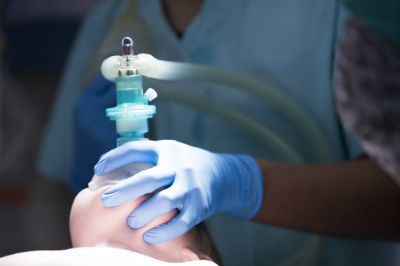 Your doctor places a small mask over your nose and mouth and tells you to count backward from 10. This isn't a strange math test, despite the fact that your doctor may be telling you the same corny jokes you'd hear in math class. You make it to 6.

You wake up. What just happened? Where did all that time go?

You just underwent general anesthesia and there is a probability of 0 that you will ever truly know what was actually happening during that time period since you were not conscious to experience it.

Do not be alarmed, though. Patients are put under general anesthesia thousands of times a day and generally the side effects are quite minor. Without this process surgery would be infinitely more traumatic. Frankly, without sounding too cryptic, you very likely do not want to know what happened.

So how exactly does this process make your 'mind' go away, or go blank, and not experience what is going on around it?

Frighteningly, nobody really knows. It just works so doctors keep doing it.

All that doctors can surmise is that the drugs they provide you with, either as an inhalant or intravenously, force your brain cells to communicate with each other less.

Strangely enough, doctors have been using general anesthesia since the 1840s, so this is by no means a new scientific discovery. There just has not been a lot of successful research into why and how this works.

Recent studies have suggested that this 'knock out' may be linked to a protein called syntaxin1A being prevented from moving around the plasma membrane of a cell. Mutations in this protein can actually make fruit flies more resistant to anesthesia.

This research shows that anesthesia prohibits the proteins' ability to form a SNARE Complex, which help pockets of chemicals bind to the membranes of nerve cells. This binding is a requirement if nerve cells want to send signals to other cells through the use of neurotransmitters.

This is just a small step toward understanding exactly what is going on with anesthesia and much more research must be done to confirm even this.

Anesthesia remains one of the greatest mysteries in medical science.